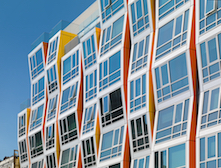 Located in the colorful Mission District of San Francisco, Vida brings to life a long-vacant space as an upscale, mixed-use residential and retail, urban infill project. Designed by DLR Group|Kwan Henmi, the façade reflects the color and texture of the neighborhood's Latin-influenced murals, craft and culture, and is scaled with respect to the adjacent buildings' varied heights and setbacks.

Owned by Oyster Development, the eight-story, 150,000-square-foot building houses 114 condominiums with ground-level retail, tenant lounge areas, a secluded courtyard and a rooftop deck. The project's $70 million scope also involved rehabilitating the New Mission Theatre and converting it from a one-screen venue to a five-screen, 900-seat theater with a bar. 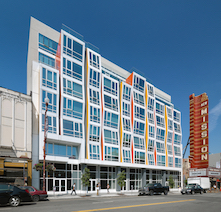 Dean Givas, president of Oyster Development, explained, "The weaving, undulating facade is meant to evoke the culture of textiles and craft and also create a sense of movement. The marquee of the theater next to the project is very strong. We favor contemporary design and believe that the best way to highlight historic architecture is to complement it with a modern facade."

Kwan Henmi continues the description, adding, "The project showcases quality and urban living. Meticulous details weave the project tightly into the existing vibrant urban fabric. The design utilizes contemporary schemes and materials to bring individuality to the building and dwelling units. The vivacious façade reflects the dynamic culture of the Mission and of the young residents that will live in this new community."

Achieving the modern look and performance, Vida's multifamily project goes beyond CALGreen's mandatory measures to become GreenPoint Rated. This rating certification is earned through Build It Green, a professional nonprofit organization that promotes healthy, energy- and resource-efficient buildings in California.

The minimum requirements for a GreenPoint Rated home are to meet the prerequisites, obtain at least the minimal points per category for Community, Energy, Indoor Air Quality/Health, Resources and Water, and to earn a total of 50 points or more. Vida targeted more than 100 points, including exceeding CALGreen Title 24 by 15 percent to earn 30+ points for building performance and low/no-VOC paints and coatings to earn 3 points for finishes. 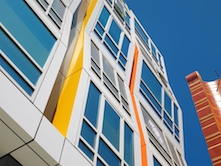 Linetec supports Winco's products and their contribution to the project's green building attributes by applying both the durable Fluropon® 70 percent PVDF resin-based architectural coatings and the thermal strut for improved energy performance.

Anticipating the residents' daily use, Winco's in-house team engineered the fully operable window vent system to minimize incoming rainwater if a window accidentally was left open. To successfully weep the vent cavity, Winco created a sloped, operable unit capable of draining water away from the building.

"This project has a challenging design where the windows are sloped 7 degrees inwards and 7 degrees outwards in alternating columns," noted Bagatelos Architectural Glass Systems.

Winco worked with Bagatelos to design a receptor system around the windows that helps withstand water infiltration and meets California's stringent seismic standards. Every single vent system was rigorously tested for infiltration before it left Winco's plant in St. Louis.

In the nearly three years since Vida opened in December 2015, the window system has proven its performance and upheld its appearance. Named "San Francisco Market-Rate Residential Deal of the Year for 2014" by the San Francisco Business Times, Vida was sold-out by August 2015, four months prior to its completion.