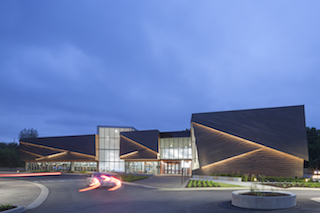 Louisville's new Southwest Regional Library recently opened its doors, which were provided by Tubelite Inc. along with its curtainwall and storefront framing. This new 40,000-square-foot, $10.2 million library boasts more than 120,000 books and materials, 100 public computers and the largest children’s library in the system. With respect to long-term environmental and economic sustainability, the project is pursuing LEED® Gold certification.

Southwest Regional Library is part of a master plan developed in 2008 by Minneapolis-based Meyer Scherer & Rockcastle (MSR). It is the first of three new buildings planned by the Louisville Free Public Library (LFPL) system. “The master plan really set the vision for the service to the entire community. It included how to deal with their existing facilities, but also to be able to expand the service into areas and communities that are under reached,” explained MSR’s principal and architect, Matthew Kruntorad, AIA, LEED AP.

Kruntorad elaborated, “It’s essentially a one-story open floor plan. Tubelite’s systems supported one of our overriding goals, which was to bring the children’s area up front, expressing the activity within the library and making it directly visible as one approached the building.”

The exterior was inspired by the act of discovery, with symbolic metal curtains that are peeled away to reveal greater knowledge within. Kruntorad continued, “The main entrance features two pairs of 9-foot-tall, wide stile doors from Tubelite – two pairs swing in and two swing out. Tubelite’s curtainwall also provided a key element for the library’s design’s daylight and transparency.” 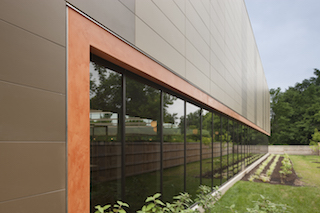 Tubelite’s structurally glazed curtainwall allowed the project “to eliminate the exterior metal mullion covers, create an extremely clean exterior appearance and make the curtainwalls appear as open as possible,” added JRA’s project architect, Colin Drake, AIA, LEED AP. “Overall, the façade is like a village of buildings, set side by side. The building takes on a much more personal scale than the overwhelming monolithic façades common with the surrounding suburban context.”

Multiple concepts were reviewed during the project’s design planning phase. Drake remembered, “Originally, we had a much more monolithic building to try and compete with the scale of much larger nearby buildings. Then, we decided to break up the façade, pushing and pulling the pieces in plan and elevation to express the interior planning more clearly on the exterior, as well as creating opportunities for visitors to discover nuances about the building as they approached. The central curtainwall, which was dubbed the ‘beacon bay,’ stands above the rest of the building to draw sunlight deep into the building during the day and use the interior lighting to glow outward in the evening.”

The beacon bay features glazing frosted on the exterior and interior in offset, vertical stripes. From a distance, it appears to be a solid frost, but up close is revealed to allow clear views through the glass at certain angles. “In a truly progressive modern library, lighting is everything,” said Drake. By incorporating clerestories on the beacon bay, as well as in other strategic spots, the abundance of natural light in the space allows artificial lighting to be reduced in real time to minimize energy consumption. 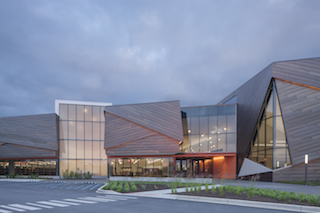 Complementing the doors and window wall, Tubelite’s 400 Series curtainwall proved ideal for the scale and metallic aesthetic of the new library. To ensure a precise installation, Koch’s glazing team conducted field measurements prior to Tubelite manufacturing it. An eight-person crew handled the on-site installation, which was completed in October 2014. Koch’s project manager, Edwin Penna, noted, “We have a long-term relationship with Tubelite. We know how to work well together to meet the unique requirements of each project.”

Enhancing the project’s environmental attributes, longevity and metallic appearance, the recycled aluminum framing was finished by Linetec using clear anodize on the interior and bronze anodize on the exterior. Because anodize is an integral part of the substrate, the coating delivers excellent wear and abrasion resistance with minimal maintenance. Anodize process by-products are recyclable and anodized aluminum is 100 percent recyclable.

About Tubelite Inc.
Tubelite was established in 1945 and is part of Apogee Enterprises, Inc. The company’s headquarters, distribution, warehousing and assembly operations are in Walker, Michigan. Its facility in Reed City, Michigan, houses the company’s aluminum extrusion operation. In 2011, the company expanded with an additional facility in Dallas/Fort Worth, Texas, and offices in Rockhill, South Carolina, to better serve clients working in the southern states.