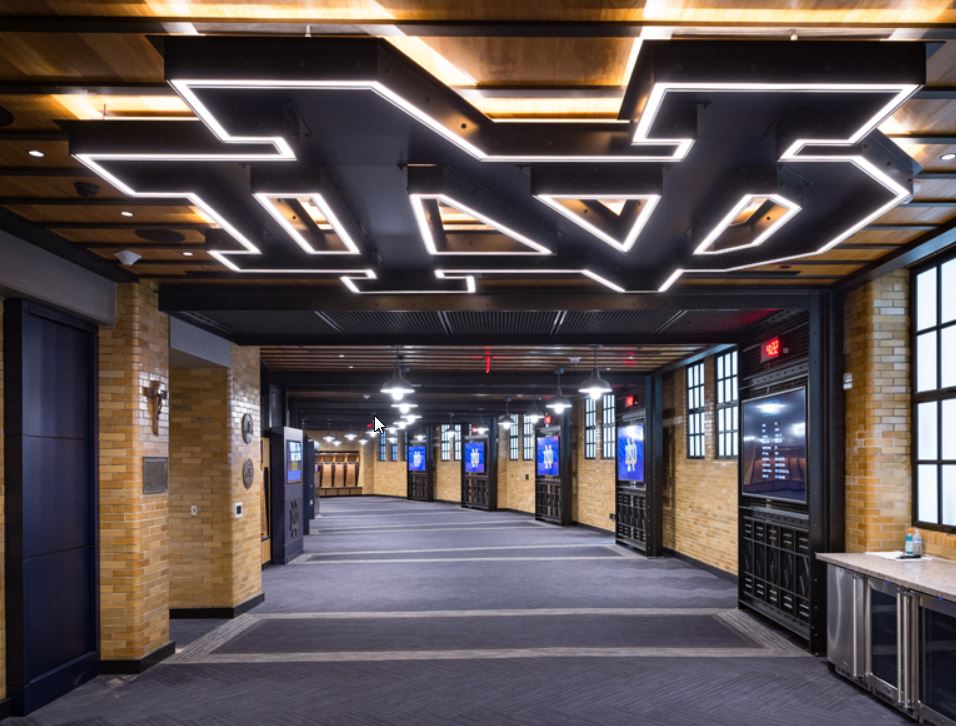 Originally constructed in 1930 and steeped in tradition, the University of Notre Dame Stadium remains an iconic symbol of the history of the storied football program. Although significantly expanded in 1999, the facilities at "the house that Rockne built" received relatively minimal upgrades and improvements through the years and alterations had left an eclectic mix of building styles.

Enter the Campus Crossroads Project, the largest building initiative in the history of the University of Notre Dame. Initiated in 2014 and completed in 2017, the Crossroads Project added 800,000 square feet of classroom and educational space via construction of three new buildings attached to the east, west and south sides of Notre Dame Stadium.

In conjunction with the Campus Crossroads Project, the architectural and engineering firm Integrated Design Solutions (IDS) of Troy, Michigan, was selected to redesign and renovate the Stadium Concourse and North End Zone facilities to include the home team locker room and recruiting lounge.

Very little had been done to the locker room since its original construction. "Some improvements had been made in 1999, but it was dated and certainly wasn't meeting the need to showcase the facilities to players and recruits," said Kevin Marshall, IDS senior associate and project architect.

Renovation began immediately after the last home game of the 2016 football season and was completed prior to the start of the 2017 season. The new locker room features a modern aesthetic, yet employs a material palette that retains and reflects the history and heritage of the football program, which was a key objective of the design team. "We clearly wanted to bring back some of the art deco design features of the original facilities," said Katy Litwin, IDS senior associate and design team member.

Old Country Millwork, Inc. (OCM) of Los Angeles utilized RHEINZINK-CLASSIC bright-rolled as the base metal to manufacture their tinted product. Strategic use of OCM Tinted Zinc played an important role in the execution of the design. The zinc products framed video monitors throughout the facility and accented end panels on multiple rows of lockers.

"We were all familiar with zinc and its properties," Marshall said. "We were pleased to have this opportunity to use RHEINZINK."

Litwin added, "We were looking for a material that offered a balance between the art deco aspects of the original stadium, yet felt masculine and a little industrial. RHEINZINK provided the natural characteristics that added depth and interest to the application. We were delighted to find a material that offered the navy blue color that would reinforce the Notre Dame brand."

The design team originally considered using simple plate steel panels for the metal applications, but because of weight, cost and aesthetic reasons, it was eliminated in favor of the zinc, according to Marshall. "There was also an uncertainty as to how the raw steel would age. We considered painting the steel, too, but concluded that it wouldn't have the natural character and blue tone that we liked with the RHEINZINK," Marshall said.

RHEINZINK America had been contacted by a member of the IDS design team "looking for a metal panel, where the color could be customized to match Notre Dame Blue, while still allowing the natural grain to show through," according to Lisa Colaianni, marketing manager. "We put the designer in touch with RHEINZINK distributor OCM, Los Angeles, because of their ability to create custom colors on RHEINZINK," she said.

OCM submitted custom color samples for review by the architectural design team, according to Gerard Kilgallon, OCM's executive vice president, sales and marketing. "The timeframe was tight. They were in a hurry," he said. "We were provided a Pantone® reference and made sample panels that matched the color, while leaving enough transparency to still show the brushed look. Color matching is a free service that we provide."

Kilgallon has a somewhat personal connection to the Notre Dame project. "My father was born and raised in Ireland and the 'Old Country' in our company name refers to Ireland," he explained. "We grew up as Notre Dame fans, so it was great to be a part of a project for the Fighting Irish."

The RHEINZINK panels were fabricated and installed by Division 6 Fabrication & Installation of Warren, Michigan. "Our team had numerous coordination sessions with Division 6 and went through the mock-up process. They were a great company to work with," Marshall said.

The RHEINZINK panels interface with original 1930's glazed brick that was uncovered during the renovation and then cleaned for reuse throughout the locker room and elsewhere. Additionally, reclaimed redwood bleachers from the Stadium were used as design elements in various areas of renovation in both the home and visitor locker room.

The completed, contemporary locker room has met with rave reviews, while retaining references inspired by Knute Rockne's original Notre Dame Stadium. "There was a great reaction from the players when they saw the finished job," according to Marshall. "It was quite a transformation from what it was before."