Client News: Almaden Valley, California residence blurs the line between indoors and out with Kolbe’s custom windows and doors 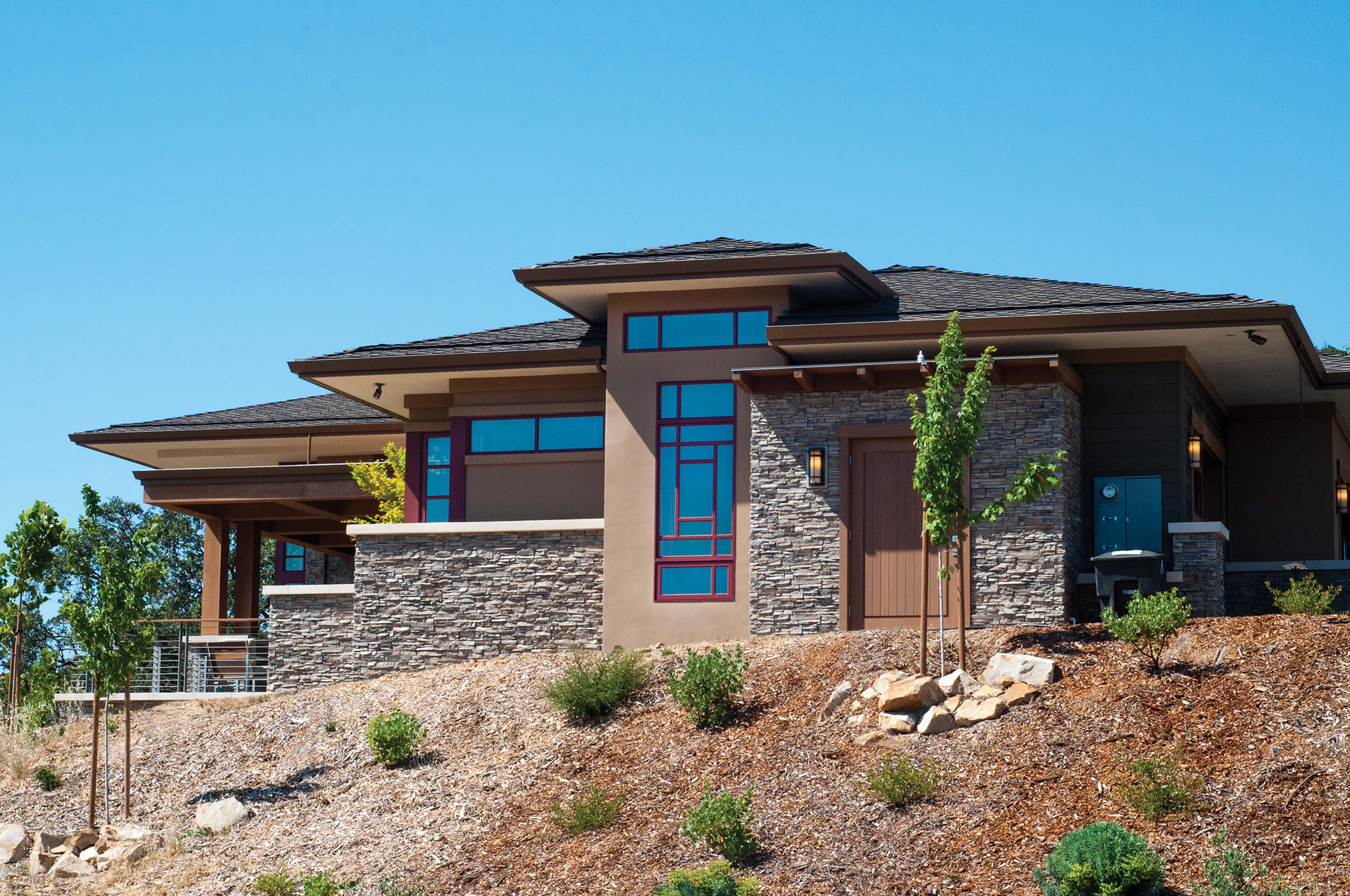 Inspired by the work of Frank Lloyd Wright and the intriguing topology of the site, this modern prairie style home features cantilevered roofs and a true integration of interior and exterior. Built on a six-acre plot of land overlooking Almaden Valley in San Jose, California, it is surrounded by the valley to the south, a sandstone quarry to the north and hill pastures beyond. The owners, Brian and Mary Haas, worked very closely with their architect (and relative), Amy Davis, interior designer (and relative), Heidi Smith and Tony Yaconelli of Pacific Builders to design a house that blends in with the terrain, both aesthetically and physically.

"We've always been interested in Almaden Valley, ever since we moved to San Jose 29 years ago. It was one of the areas where you could leave the business and the traffic of Silicon Valley, drive over the hill, and it was very peaceful. It really is a special place," says Mary.

The Haases share a personal history that ties into the house and the lot that it stands on. "We're both born and raised in Wisconsin – we met at the University of Wisconsin – and I grew up not too far from where Frank Lloyd Wright, the famous architect himself, was born and raised. I've always been a fan of his architecture; even as a young kid, I used to design houses, just playing around. My mother actually knew Frank Lloyd Wright – he used to stop in and visit at her shop," states Brian.

The location selected for the house also bears ties to Brian's alma mater for graduate school: "The immediate area, including where the house sits, was all a very large sandstone quarry – the same quarry that was used to build Stanford University. That's a personal connection for us since I came to California to go to grad school at Stanford," Brian adds.

The natural terrain played a crucial role in the structure, material selection and design of the house. "I didn't want to completely reshape this beautiful mountain lot. We wanted to really blend in with it, and so all the main floors are at the native level that the ground was when we first started construction ... so really, the house blends in naturally to the hillside," states Brian.

"One of the fun elements of the house is the ability to invite the outside in and to really blur that distinction. Part of the way we did that was to incorporate the exterior materials inside – the stone, the wood, the metal, obviously glass. We even brought the exterior siding inside the house," continues Brian. "To further complement that, we have the ability to take the large Kolbe glass doors and fold them completely open so that it completely blends our living room with our patio. It's a great way to feel really connected to this beautiful scenery and hillside that we have around us."

The house was originally designed with another window manufacturer in mind, but when presented with the complex details of the project, that manufacturer stopped returning calls. Yaconelli then urged the Haases to consider Kolbe, saying, "I think Kolbe is going to be a really good fit. They can handle the complexities and the details better than I think anybody can, and I recommend we work with them."

Yaconelli worked with Brian Schultz from Kolbe distributor Murray Window & Door in Campbell, California. He says, "Brian really understands the windows and the detailing. There was so much complexity in these windows and doors that I wanted to make sure that we had someone on the team that could really put it all together."

All of the windows needed to be custom to meet the architectural requirements of the structure. Kolbe's Ultra Series windows and doors were the chosen solution for this distinctive design, offering expansive openings, folding doors and corner windows for maximum viewing. Brian explains, "The key thing for us with Kolbe was that they were the only window manufacturer that we could find to actually provide all the different kinds of windows we needed in this house, from the corner windows, to the large doors that open up and allow us to have a blend of inside and outside for our living room and patio, the very unique inverted corner windows, and not to mention all of the glass doors that are prominent throughout the home. Only Kolbe could provide all of that for us."

Down to the Details

The complexity of the windows required a separate architecture of their own. To support these windows and add strength to the structure, the house was built as a steel skeleton for an open floorplan and for stability during an earthquake. A series of study models were built to help determine how all of the building elements fit into the structure.

During the planning stages, Brian manipulated a 3-D rendering of the house to tweak the design and work out the positioning of various building elements. He notes that Kolbe's Revit® and SketchUp® 3-D models made it easy for him to find what he needed. "Designing the home was certainly a big adventure for us, and probably the most fun I've ever had on a project. I'm an engineer, so it gave me the chance to be very creative at putting some unique features into the house."

Brian continues, "Then our local representative [Brian Schultz] came to the house several times... and took very meticulous measurements of all of the openings. Working with the contractors, myself and the architect, he helped with final selections of the grid patterns and exactly where those grids would line up to one another. It turns out that it is exceptional attention to detail that either makes or breaks the design."

Visitors enter the home through a wood door with custom red performance divided lites in a redwood barrel vaulted entrance. "The architect took great time to design that front door, and Kolbe was able to copy it exactly and manufacture it just as she wanted," remarks Mary.

Kolbe's broad color palette and extensive product offering presented the option of red aluminum exteriors for the windows. "That was really a unique part that the stunning red exterior view, combined with the warmth of the wood interior, makes it both a warm home, and an intriguing home, with incredible views," Brian comments. "We were able to do some unique tricks with our window architecture as well, like having two very prominent corners in the house with very prominent views without requiring a post or a wood seam between them – we just have glass meeting glass. It creates an interesting architectural look and at the same time it doesn't block the view," adds Brian. Similarly, the living room blends interior with exterior, featuring 10-foot tall folding doors that open to the patio and the outdoor view.

The versatility and flexibility of Kolbe made it possible to include one-of-a-kind, complex corner and inverted windows, as well as numerous customized divided lite patterns throughout the home. Higher ceilings further modernize a structurally complex design, with clerestory windows on all four sides ascending to the cantilevered roofs. "I wanted the ability to bring light in at any angle, any time of the day," says Brian.

"He would have built the entire house out of glass if he could have," adds Mary.

"Because the whole house is designed around the view, the view itself invokes vision. I think it was also the vision of Kolbe that helped us make this a reality," Brian explains. "If we didn't have the freedom to do the custom windows, not only could we have not met all of the architectural requirements – the sizes of the windows had to be custom in order for us to maintain the unique architectural element of having the windows all the way up to the ceiling and not having a wall break – but we also wouldn't have had the color, wood species and gridline options to make the project truly unique."

"Unlike the competition, Kolbe was able to manage the intricacies of the windows. There were so many things that were unique – there's outside windows that make an outside corner, there's inside windows that make an inside corner – those just aren't done, they're very difficult to put together," Yaconelli notes. "What was inspiring about the house was that it took the site into the design. There are phenomenal views here – you see birds resting on the stones on top of the hill, there's paths, there's views down the hillside that are just gorgeous. In this home, every window, every view, took that into consideration. All the planning paid off – when the parts came together it was really incredible."

Brian reflects, "My very favorite moment in the house would be mid-afternoon, when we can open up these doors and we have a real welcoming toward the outside – it really pulls us toward the valley."

What began in 1946 as a two-brother team has grown into an internationally respected manufacturing company. Kolbe Windows & Doors is one of the nation's leading manufacturers of windows and doors for residential and commercial markets. After 70 years, Kolbe products are best known for superior quality, custom craftsmanship, attention to detail, as well as innovative and unique designs.