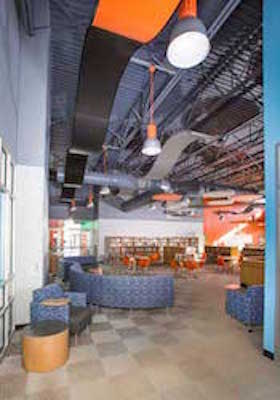 With recent economic growth in Cushing, Oklahoma, the community saw an opportunity to improve its schools and build for its future. "Our buildings dictate what we do educationally," acknowledged Pat Elder, Cushing Middle School's principal. Today, more than 1,800 students are enrolled in the school district.

"The existing schools, which were replaced, date back to the 1950s and 1960s," noted Dayna Boynton, principal of Boynton Williams & Associates (BWA) Architects.

"The newest building was designed in the '70s and certainly the safety concerns that we have today for students weren't the same then," added Melissa Amon, assistant principal at Cushing Middle School.

The middle school's educational spaces are further designated into a center for 5th-6th grades and another for 7th-8th grades. "It's basically two schools in one," described Koln Knight, Cushing Public Schools' superintendent. "It's a great design. ...By moving to the center concept, our children will start out together and they will go through their entire educational experience as Cushing Tigers."

Prior to Cushing's new and expanded educational facilities, space was in such high demand that the students already were in their seats for the 2015-16 academic year as the finishing touches were being made on the buildings. BWA Architects not only designed the new middle school and high school expansion, the firm also helped raise awareness and support for funding the $30 million construction projects.

In selecting ROCKFON's products for the middle school, BWA's Boynton sought a ceiling system that could "create interest, while keeping the majority of the spaces open to structure."

Working closely with BWA, Lambert Construction served as the construction manager for both the middle and high school projects. Lambert's project engineer Shannon Gilchrist remembered, "At the peak of construction, we had about 100 people on site. Once the school year started, we had about 30 people who continued working at night and on weekends so as not to disrupt the students."

Coordinating schedules with Lambert, R.L.S. Construction completed its installation of the ROCKFON ceiling systems during the summer break. "The ceiling systems installed rather easily," noted Rick Smith, owner and president of R.L.S. "With four people and ROCKFON's system, we were able to meet the scheduling and the budget. It worked really well and looks good, too."

BWA's Boynton agreed and said that the clouds, "created the interest we were looking for in a soft form" and "kept the look of the ceilings linear, as well keeping in line with the form of the spaces and corridors."

The 1,392 square feet of CurvGrid panels were inserted in ROCKFON's factory-curved suspension system. "Our patented, primary carrier system reduces labor-intensive hanger drops. It conceals the suspension from view to create a neat, ribbon-like appearance," remarked Frasca. "Accentuating these curves, we finished the aluminum panels and perimeter trim in standard Black and Satin Silver, plus a custom Tiger Orange."

"There's a lot of color on the ceilings – all of our school colors," proudly stated Cushing School District's director of plant management, Chris Hubbard. Tiger Orange ceiling accents were used in the corridors, commons, cafeteria, library and administration areas. 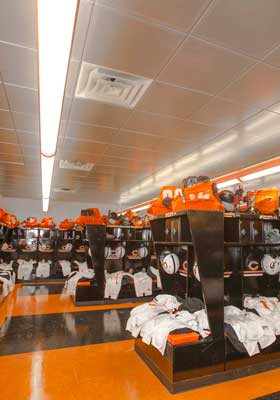 "I'm really impressed with the ceilings," added Hubbard. "The installation seemed to go well and they look great."

"Durability was important for this type of application, as well as the light reflectance," emphasized Boynton.

"The light reflection and diffusion of a ceiling should be as high as possible. Poor lighting can result in eye strain, fatigue and headaches, which can lead to decreased concentration and ultimately, may affect students' performance and test scores," observed Frasca. "Most ROCKFON white ceiling panels reflect between 83-86 percent of available light. They have a homogenous surface without any visible holes or perforations, and their high diffusivity limits hot spots and glare for increased comfort. Combined, these qualities optimize both artificial and natural light sources, which also can save energy."

Cushing Public Schools' superintendent Koln Knight shared his thoughts on the new and expanded schools: "This vision and new direction provides us with the opportunity to provide a quality education for our children, a more safe and secure learning environment for our children, and allows us to maximize the use of the resources that we have."