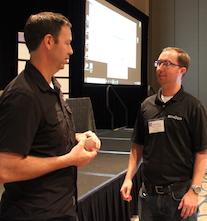 robably don't often have builders speak with you, and it's an honor," he said."

What I was building in 1995 is pretty darn similar to what I am building today, with some local Texas builds," he said. "They are similar from a building technology standpoint and a window standpoint as well."

Risinger is interested in home performance and building science. Since 2002, he has worked to provide predictive capability to optimize the building performance of new and existing buildings.

He broke down the basics of a residential structure's building envelope, which include a support layer, control layers and protection. Control layers handle issues like rain and ground water, air leakage, water vapor and thermal control.

Risinger gave an example of why these layers are so important, and how they differ from climate to climate.

"When I moved to Texas, we started building 'mullets,' which were salt boxes in the front, modern in the back," said Risinger. "But the windows [on an early build] were sweating. Texas is a hot, humid climate."

Risinger said he initially attributed this problem to a condensation issue, but luckily, he recruited his carpenter to come out and take a look.

"It needed to be flashed and caulked correctly," he lamented. "We had to rip off the entire facade to fix it all. Thank God the clients were wonderful people!"

This is around when Risinger began to understand the true value of overhangs on homes.

"When you don't have them, a lot of bad things can happen," he said. "Ninety percent of all walls which have problems do not have any kind of overhang. Plus, drop size and wind speed matter."

Risinger then addressed what is going on today in building and cited a crisis in installation.

"It's not just about having great materials, it's about workmanship," he said. "As the manufacturer of a window, you're going to get blamed for a window leak. Installation matters."

Sloped sills are needed, and builders must deal with gaps. Openings must be flashed correctly, he said

Then, Risinger spoke about the future of the industry and a recent trip abroad for a homebuilding show, BAU.

"They have a different mindset than we do," he said. "They are not just building houses to last 20-30 years. They believe in generational ownership of homes."

Risinger described visiting what he called the German version of Home Depot, where the least expensive window costs $175.

"But, it was triple-glazed," he said. "So, it was not that much more expensive than the cheapest American window, but it was double the efficiency."

Risinger said he hopes to see similar expectations of the American market in the future.

"A friend of mine said it's not that high-performance houses cost too much -- it's that our idea of a fairly priced home is based on a history of building houses to meet low performance benchmarks," Risinger said.

At the end of his session, Risinger answered questions from several interested individuals at the conference and shared where to find his YouTube show.

"I have a side business making videos about building and it's taken on a life of its own," he said.

More information about AAMA and its activities can be found on the AAMA website, https://aamanet.org.