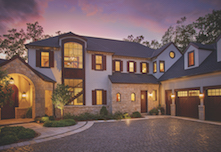 Inspired by the natural landscape of its wooded Wisconsin lot, this newly built dream home appears as if its foundation was constructed more than a century ago when the surrounding oaks first sprouted. The house's stepped shape fits within its setting, appearing to grow from the ground itself. With mathematical precision, Kolbe Windows & Doors' products were thoughtfully selected and aligned for architectural balance. Each opening was positioned to frame the best views through the forest to the lakeshore.

Tom and Dea Fotsch chose the site because they wanted a home that nestled in with the tress and was built into the land. As a couple who enjoys hosting their family and friends, they wanted a large enough space to comfortably welcome and accommodate their guests. They turned to Will & Fotsch Architects, a California-based firm co-owned by their son, Andy Fotsch to help design their vision. Specializing in residential projects with a personalized approach to livable luxury, the firm worked with Wisconsin-based interior designer, Amy Carman Design, to find the best long-term solution for the homeowners.

Andy acknowledged it was a challenging assignment: "I struggled for a long time to figure out how to put a home on the lot, due to the amount of elevation changes and the odd, L-shaped buildable area. Then, I found the location I wanted the front door to be in – it had the best view across the wetland and I used that as a centerline. It became the angled hinge that connects the master bedroom wing to the rest of the house."

Consistent throughout every design iteration, Tom and Dea sought an enduring appearance; one that commanded a sense of heritage without being imposing. "They wanted it to look like it had been there for a hundred years," affirmed Andy.

In regard to style, Andy defines it as "loosely French Country. It's casual, refined rustic, comfortable, not ostentatious and not over-scaled. It feels like you can come in barefoot and walk around."

The outdoor paths and landscaping masonry are the same stone that is used on the home's exterior and on the lower level's flooring and walls. As a classically trained architect, Andy studied stonework in Rome. Drawing from his education and expertise, he worked with the masons to install the stone veneer at the ground level so it would resemble traditionally applied, full-sized blocks. Stone quoining also was applied to key exterior features, such as the east vestibule arch and all of the windows.

"I wanted all of the stone detailing to look tectonic and be traditional, the way stone walls were built a hundred years ago when the stone was actually load bearing and there was not a structural wall behind the stone. It turned out amazing," praised Andy.

When guests come in the main entry, they are immediately greeted by a huge window and realize that they are 13 feet in the air gazing into the treetops, overlooking the wetlands and out across the lake. "Some of the windows are huge," Andy said proudly. "I really pushed the limits of the fixed radius units. I heard they are some of the largest Kolbe has made."

Taking advantage of modern performance with a traditional aesthetic, Kolbe's Ultra Series windows and doors offer the durability of an aluminum exterior with the warmth of a wood interior. At Kolbe, every order is considered "custom" and each product is made-to-order for the specific project.

In the Fotsch home, sliding patio doors with a radius transom feature delicate divided lites. Andy opted to fill the center of the transom window with a custom diamond shape and precisely align the vertical mullions to the door below.

A wall of half-circle windows with awnings beneath them adorn Dea's study. 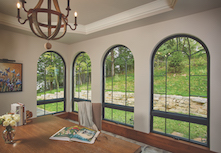 Custom-designed performance divided lite bars align from the fixed radius windows to the operable windows below. Andy saw a chapel-like quality to the room. "Dea wanted a more contemporary feel in her study. So, I decided to clean up the design in a more modern way by removing the wood window casing. The windows still feel traditional as they go all the way down and sit on the 8-inch baseboard, which returns into the windowsill to give the large radiused windows a base."

Andy insisted on using a dark finish for the windows and doors. "The Night Sky mica finish gives the outside of the windows the look and texture of steel with a subtle shimmer of color in the finish. A flat color finish does not have that life. Seeing the windows surrounded by the stone walls, their slender frames look like steel – just like they made windows years ago – classic and elegant."

In addition to achieving an "old" look with new construction, Andy also struck the right balance of proportion and perspective for the 7,690-square-foot home. "It's a sizeable structure, but the inside really does not feel like a large house," he explained.

"We designed the house and positioned the windows so that every room has a view in at least two directions – if not three – of the natural, panoramic surroundings. A two-point perspective view, or a corner view, where you are looking in two or more directions is so much more dynamic than a stationary one-point view," he continued. "Whether it's at a corner, or looking through the house into another room's windows and to the outside, we wanted always to be seeing through and out to nature."

Additional design details to support the sense of separation and togetherness can be found in the overall floorplan of the home. "The stairwell flies free and contributes to the sense of openness and contrasts with the solidity and strength of the house," explained Andy. "Other than the stair hall, there really are no hallways. The main part of the house is essentially the two rooms – living room and kitchen – they function as the core of the house, and open and flow into one another. They are open to each other yet are individual spaces."

A very similar color and material palette is evident throughout the Fotsch family's home, delivering a continuity between interior and exterior. Andy shared several wood, metal and stone highlights:

For all of the doors and windows, alignment was critical. The pane size drove the window size and PDL mullion widths to achieve the proper ratio throughout each room. "I used a 2:3 proportion to create the three pane sizes, then built all of the overall window sizes based on configurations of those base sizes," reasoned Andy. "We used different combinations of two, three or four units to hold this visual continuity throughout each room and elevation."

"Pure forms and pure geometry" of this 2:3 approach had its challenges, such as with the diamond window turned on its side in Tom's study. "I wanted the mullions to line up with the transom above. Due to the extra width of the frames of the sliding doors below, the panes in the transom would have been different widths if the mullions aligned vertically," recalled Andy.

At every turn, strong horizontal and vertical alignment are balanced with angles and curves. Radius arches and gables create an elegant softness throughout the home. Not surprisingly, Andy brought this forward with intention. "Everything is angled at 60 degrees and proportional variations. I like the purity of this. It's more subtle, not as stark and harsh as 45 or 90."

Circular windows are centered beneath the peaks of the roof. An eyebrow arch roofline follows the curve of the radius windows on the upper level. Radius segment picture windows are featured in the west elevation's two bedrooms, Tom's study and the vestibule, as well as the east elevation's upper landing.

While the shutters are ornamental, Andy emphasized, "Each is exactly half the width of the window next to it. This house has none of those fake shutters that couldn't actually cover the window."

Architectural details support the home's sense of longevity and scale, as if they were part of an original structure that was expanded through the decades. Most notably, Andy said, "The idea of the sunroom was that it should look like an addition. This breaks the symmetry, adding definition and character."

The Fotsch residence achieves a sense of balance within its environment and between old and new design styles. Large radius windows from Kolbe bring a modern twist to the traditional stone and wood details of the home.

The completed project successfully blends past and present to create a timeless home with traditional and modern details. The residence establishes roots with the land and captures views of the surrounding beauty. "You really feel like you are living in and among the trees," Andy concludes.

What began in 1946 as a two-brother team has grown into an internationally respected manufacturing company. Kolbe Windows & Doors is one of the nation's leading manufacturers of windows and doors for residential and commercial markets. After more than 70 years, Kolbe products are best known for superior quality, custom craftsmanship, attention to detail, as well as innovative and unique designs.
###