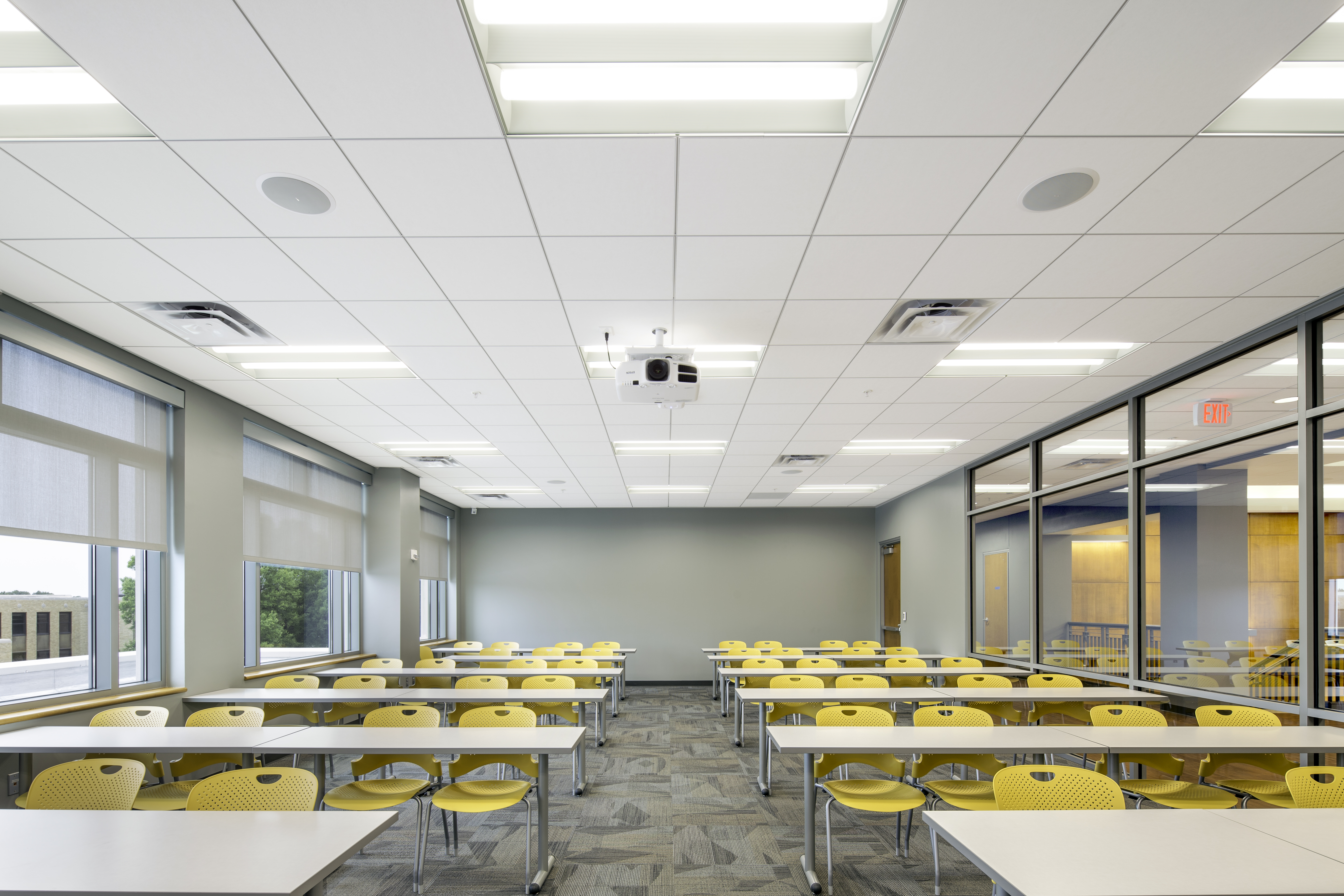 “The new building will be at the heart of every ASU student’s experience on this campus,” said Dr. Lauri Umansky, former dean of the Humanities and Social Sciences (HSS). “Our courses engage students deeply in the world around them. And we have a first-rate faculty. That we will soon be able to offer this kind of high-quality education from a spectacular, state-of-the-art facility is truly exciting.”

The HSS building serves as a centerpiece linking Historic Mall to the west, the Caraway Mall to the south, and the new Campus Commons to the north. The structure dramatically defines the edges of multiple plazas and vistas. Inside, it encompasses more than 40 classrooms, laboratories, seminar rooms and approximately 140 faculty offices plus a large atrium for groups to gather.

HSS will have 24 percent more space than offered by the building it replaces, Wilson Hall. Arkansas State University’s oldest building opening in 1932, Wilson Hall eventually will be adapted and renovated for other uses. 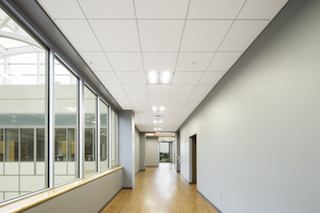 Considered one of the largest instructional buildings on a university campus in the state of Arkansas, HSS has been constructed in four phases with an estimated budget of $36 million. The final phase was substantially completed in June 2015. This phase focused on the interior and site exterior and was completed in 16 months with Tate General Contractors. Tate worked with AMR on all four phases of the project. AMR also received architectural support from CahoonSteiling | Studio of Jonesboro, Arkansas.

In total, AMR Architects was involved for more than 10 years on the project. The initial design was bid in 2003 and shelved due to budget constraints. With financial support from the governor and state legislature, the project first broke ground in Sept. 2008.

During the continued phased construction, the university incorporated some modifications as classroom count and size changed dramatically. Budgets remained top-of-mind in continuing from one phase to the next. AMR Architects employed value engineering methodologies to ensure the construction and materials maintained the project’s performance and aesthetic requirements, as well as provided the most cost-effective selections.

In early 2014, as the fourth phase began, AMR Architects’ Jamie Borg, associate AIA, reviewed value-engineered options for the ceiling systems selections. The existing specifications called for an acoustic ceiling tile with a white finish that met the requirements for Seismic Design Categories D, E and F and the high Noise Reduction Coefficient (NRC) of 0.70.

Meeting the project’s multiple requirements, ROCKFON’s district manager Jim Frasca presented Borg with a cost-effective bid request for substitution. He elaborates, “Although well known in Europe, ROCKFON’s acoustic stone wool ceiling products were just being introduced to the North American market at this time. ROCKFON Tropic® acoustic ceiling panels achieve an NRC of 0.85 with no upcharge and have a nice, smooth, white finish. Coupled with our Chicago Metallic seismic suspension system, it was exciting to show Jamie a complete ceiling system that not only fit his aesthetic and performance needs, but his budget and schedule, too.” 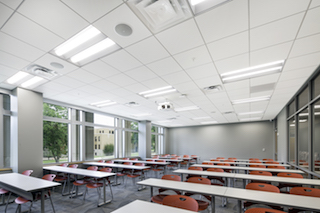 Borg agrees and adds, “We took the ceiling tile out of the grid in our office and put the ROCKFON sample next to the product we initially specified. Appearance-wise, it was a nice match. Budget-wise it was competitively priced. The decision was made to go with ROCKFON.”

“Ultraline suspension systems are mitered for continuous flow at the intersection to minimize the grid appearance and avoid an institutional feel, achieving a high-end, monolithic look,” describes Frasca. “Contributing to the speedy installation, the Ultraline suspension system’s stab-end cross tees give an audible ‘click’ when the cross tee is inserted fully. And, as with all of ROCKFON’s stone wool ceiling panels, Tropic panels are easy to cut and are 50-75 percent lighter than other ceiling panels making them easier to install.”

The Ultraline suspension system further contributes to the ceiling systems anti-microbial performance and sustainable goals, in addition to being ICC-ES listed for seismic suspended ceiling applications. Providing low maintenance and long-term durability, these ROCKFON products supplied in North America are supported with a 30-year product warranty on the stone wool ceiling panels and a 40-year on the suspension system. 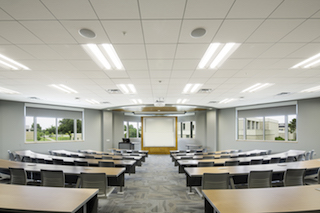 Arkansas State’s director of planning design and construction, David Handwork, P.E., notes, “I was equally pleased with the aesthetic and installation characteristics of the ROCKFON ceiling system within the Humanities and Social Sciences building. The very clean cuts and maintainability will make a significant difference in preserving the new look and feel within the building for decades to come. The project architects at AMR made an excellent selection when choosing ROCKFON for our newest marquee building.”

AMR Architects’ Borg concludes, “Working with ROCKFON on the project has gone well. It’s exciting to be a part of Arkansas State University campus’ largest and most prominent building on campus.”

Reflecting on the new facility that the HSS and other programs would soon occupy, Umansky, added, “How fitting that this beautiful new building sits at the center of our campus, here to welcome students to both the immediate and the enduring benefits of learning in a university setting. We are deeply grateful to all who have had the faith and persistence to make the completion of this building a reality.” 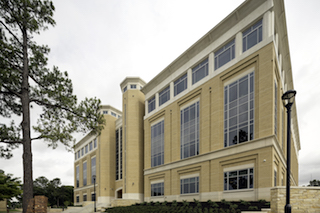