In the next 30 years, one in five metro Vancouver residents are predicted to live in Surrey. Serving its growing community, the Guildford Recreation Centre’s multi-purpose facility is open seven days a week. Expanding the existing recreation facility by 75,000 square feet, the $38.6 million project includes a larger fitness center and lobby, more office space, a bridge and 300 seats for spectators, plus the 37,000-square-foot aquatic center. Constructed while the existing recreation center and parking remained fully operational, the aquatic center addition was completed in Feb. 2015.

“At Bing Thom Architects, we try to provide unique elements in all our projects. These elements contribute to enhancing the user’s experience of the space and creating iconic forms in the physical landscape,” said BTA’s project manager, Lisa Potopsingh. “With the Guildford Aquatic Centre, these unique elements are the integrated wood trusses and the use of natural light within the natatorium and the pixelated pre-cast panels of the façade.” 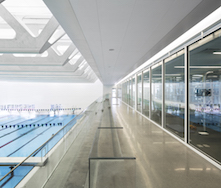 Known for its experience with architecturally exposed timber structures and trusses, StructureCraft was involved at the earliest stages in the design process. Potopsingh continued, “We spent a lot of time together considering the best way to integrate the structural, mechanical, electrical and acoustical elements, so services were not exposed and it was aesthetically pleasing. We wanted to keep things clean, white and modern in the natatorium. The integrated trusses helped in this way and also created some texture to the space.”

“We considered the space, its function and its construction. We saw the challenge in front of us first, as a performance specification,” explained StructureCraft’s business development engineer, Brian Woudstra. “Structurally, we needed to engineer it in the most efficient way to take the loads. Acoustically, we needed to manage the noise and echoes. All of the lighting in the pool was to be indirect, so we needed a highly reflective material to direct available light throughout the space. Atmospherically, we would be dealing with humidity and chlorine from the pool. On site, we knew we would have no storage space and no time to build in the field.”

With the clarity of the challenges before them, StructureCraft carefully considered its options. “We proposed a system of 22 trusses, 100-feet-long each, that would be stored and completed off-site, then craned into place. Each truss would be prefabricated with everything from the roof membrane to the mechanical ducts, sprinklers, light fixtures, insulation and ceiling panels,” described Woudstra.

Ceiling panel selection was a critical part in meeting the overall performance specification and the building team’s approval. “We must have looked at 10 different ceiling manufacturers before ROCKFON was chosen,” remembered Woudstra. “Although ROCKFON’s products were new to us in North America, we reviewed its demonstrated history and precedents on other pool projects in Europe. ROCKFON’s ceiling panels met the project’s acoustic, light reflectance and atmospheric requirements, and the budget target.”

Based on all the advantages of stone wool ceiling panels, ROCKFON Sonar Activity direct mount and Sonar CDX concealed panels were approved.

“Pools and gyms are notorious for their noise,” observed Woudstra. Imagining the Surrey natatorium filled with participants and spectators for a competitive event, the volume and echoes potentially could reach painful levels. Mitigating this, ROCKFON Sonar ceiling panels are made from stone wool, an inherently high-performing, sound-absorptive material.

Noise Reduction Coefficient (NRC) is a measure of a surface’s ability to reduce noise by absorbing sound. A higher number is better. A ceiling with an NRC of 1.00 absorbs a lot of sound. A ceiling with an NRC of 0.00 absorbs very little sound. A high NRC is important in areas where people converse in groups and high levels of noise are present. ROCKFON Sonar ceiling panels achieve an NRC of 0.90.

The smooth white surface of ROCKFON Sonar ceiling panels also reflects up to 85 percent of all available light. “Early in the design process, it was determined that lighting would be used as one of the principle elements of the natatorium,” explained Potopsingh. “Lighting reflected off the acoustic panels and the interior wall finish with carefully selected specific tint and gloss levels created a soothing environment, while achieving ASHRAE/IES 90.1-2007 and FINA [Fédération Internationale de Natation] illumination requirements.”

Given the humid environment of the pool, water-resistant and mold-resistant products were specified. ROCKFON stone wool ceiling panels are water-repellent and dimensionally stable at up to 100 percent relative humidity. Stone wool also has no nutritional value and therefore it provides no sustenance to harmful microorganisms.

“ROCKFON worked with us,” Woudstra elaborated. “They cut the stone wool panels in custom sizes. This made it easy to install the panels. They also re-wrapped and finished the edges to give it a nice, clean look. The modularity of our trusses is a beautiful part of the solution.”

He continued, “The middle section of each truss is about 8 feet wide with a big fat metal HVAC duct in place. This leaves 3 feet to the right and left. ROCKFON Sonar Activity ceiling panels were directly adhered to the underside of the HVAC ducts. StructureCraft and ROCKFON worked together to develop the glue adhesive that could withstand the pool area’s performance requirements. On the right and left wings of the truss, the panels were mechanically fastened to the underside of the plywood decking via a lumber furring system.

Once completed, the prefabricated trusses were loaded onto a truck at night to minimize disruption to Surrey’s traffic. “We could get two trusses loaded and trucked to the site each night. During the day, the entire truss then was erected into place using a crane. We really had to watch our layout to achieve the necessary gaps, reveals and precise fit. Once they were all in place, the whole thing was roofed and weather-tight,” said Woudstra. “Overall, it worked well.”

Celebrating its first anniversary in 2016, Surrey’s new aquatic center continues to offer its members and guests a recreation and therapeutic destination. “Investing in our City’s recreational facilities is a vital component of our ability to build healthy communities and maintain a high quality of life for our citizens,” said Surrey Mayor Linda Hepner. “We are committed to delivering outstanding recreation services that meet both the diverse range of activity levels and needs of our growing population.”

In addition to praise from the community, the project earned industry recognition by the Vancouver Regional Construction Association (VRCA). The aquatic center and StructureCraft earned the 2015 VRCA Gold President's Trade Award for the $1 to $3 million category.