Schaumburg, Illinois – In-person participants at the 2021 Fenestration and Glazing Industry Alliance (FGIA) Hybrid Fall Conference learned strategies and techniques for ways to disarm active shooters in a presentation and active workshop from Sentinel Security Group, which was sponsored by the FGIA Fenestration Safety Committee. In an across-the-board presentation called "Preparing for Active Shooters and Preventing Mass Casualties | When to Run, Hide or Fight," Donnie Hawkins and Mike Britt shared the questions companies need to ask themselves about their facilities to ensure their security and that of their employees. Later, in three workshop time slots, the pair demonstrated hands-on strategies for participants, who in turn had the opportunity to practice these moves on one another.

"An active shooter is someone with a weapon, not necessarily a gun, attempting to harm others," said Britt. "While mostly men, there is no single profile for an active shooter or single warning sign, making incidents hard to predict. Many use handguns which are easy to conceal."

Hawkins explained that while the common protocol in an active shooter situation is "run, hide, fight," he pointed out this plan has flaws. "Humans confronted with sudden violence either run, fight or freeze," he said. "It lacks the flexibility necessary to 'allow' victims to use violence as a first response. Think of it like run or hide or fight." Hawkins recommended companies train their employees on knowing where exits are, where windows are (and whether or not they open) and knowing what they need to secure specific doors in their workplace. "Your body will only do what your mind has trained it to do," he said.

Britt shared some suggestions for the first option in an active shooter plan: "Run." "Have an escape route and plan in mind. Leave personal belongings behind. Help others escape, if possible. Prevent others from entering after you leave the facility. Have hands visible in the air with fingers spread, and follow instructions given by police," he said.

Hawkins said that, while some of these tips may seem like common sense, "I am telling you there is no such thing as common sense in a deadly force environment. Escaping danger is one of the most primal actions of the human brain."

Next, Britt discussed "Hide." If running is not an option, look for ways to barricade and secure doors, he said. "Limit entry points. Silence phones. Hide behind large items like filing cabinets, and stay quiet. Train your people how to lock down stuff. Ensure emergency numbers are available at all phone locations." He added that knowing some barricade techniques can be crucial. "Even a belt or shoelace can be used to barricade a door by tying off a door handle. Slight resistance can deter an active shooter who is trying to harm as many people as possible in the shortest amount of time. While barricaded, prepare to fight in case your position is compromised." 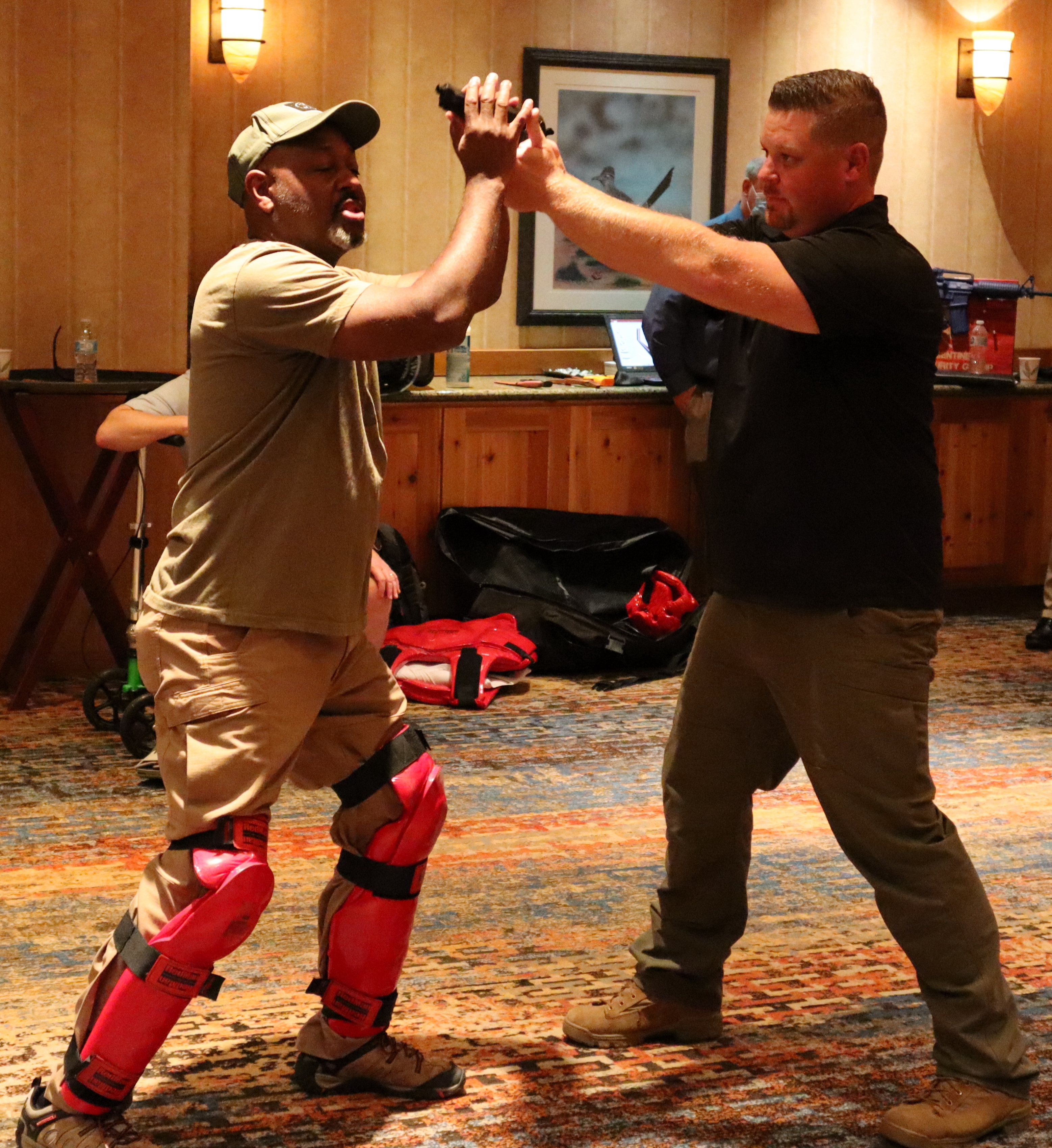 Hawkins concluded the "Run, Hide, Fight" strategy by covering "Fight." "When your life is in imminent danger, attempt to disrupt or incapacitate the shooter by acting aggressively, using improvised weapons. Go for the neck." Hawkins said if there is a fire extinguisher in the room, one can spray it in an active shooter's face, but it may be smarter to hit them with it. A sprayed fire extinguisher can impact a shooter's vision and senses, but it can impact the person deploying it as well. He also emphasized that "you fight when you absolutely have to. Do not bring the fight to the shooter."

"Building an active threat response program includes developing a plan and validating it," said Britt. "Train your workforce -- if you don't use it, you lose it."