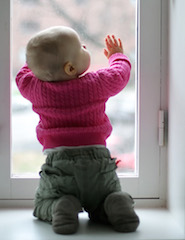 As spring arrives, the National Safety Council's Window Safety Task Force encourages everyone to recognize the importance of practicing window safety during Window Safety Week, being observed in 2017 from April 2-8. However, open windows any time of year can be dangerous for young children who are not properly supervised. While the number of falls from windows is generally very small compared with other recorded child injuries, a window incident can result in serious injury or possibly even death.

Each year, the Window Safety Task Force of the National Safety Council takes the first full week in April to educate on the importance of practicing window safety year-round. National Window Safety Week is designed to increase awareness on helping to prevent accidental window falls and the proper use of windows for emergency escape purposes.

Falls from a window can result in serious injury or death and pose an especially dangerous threat for children. Every year, about eight children under age five die each year from falling out a window, and more than 3,300 are injured seriously enough to go to the hospital.*

To protect children, the Window Safety Task Force offers the following eight safety tips:
1. When young children are around, keep windows closed and locked.
2. When opening a window for ventilation, use those located out of a child's reach. For example, the upper sash of a double hung window.
3. Avoid placing furniture near windows to prevent young children from climbing.
4. Don't allow children to jump on beds or other furniture to help reduce potential falls.
5. Don't rely on insect screens to prevent a window fall. Insect screens are designed to keep bugs out, not to keep children in the home.
6. Supervise children to keep child's play away from windows, balconies or patio doors. Keep play in the center of a room, if possible.
7. Install code-compliant devices designed to limit how far a window will open or window guards (with quick-release mechanisms in case of fire) to help prevent a fall.
8. Teach your child how to safely use a window to escape during an emergency, such as a fire.

* According to Safe Kids Worldwide's 2015 Report to the Nation: Protecting Children in Your Home

About the Window Safety Task Force

The Window Safety Task Force was formed in 1997 to promote greater awareness of window safety. The task force is comprised of members representing the American Architectural Manufacturers Association (AAMA) and the Window & Door Manufacturers Association (WDMA). Window Safety Week, the first full week of April, was established to heighten awareness about what actions homeowners can take to establish window safety and fall prevention as a year-round safety priority.

About the National Safety Council

Founded in 1913 and chartered by Congress, the National Safety Council, nsc.org, is a nonprofit organization whose mission is to save lives by preventing injuries and deaths at work, in homes and communities, and on the roads through leadership, research, education and advocacy. NSC advances this mission by partnering with businesses, government agencies, elected officials and the public in areas that can make the most impact – distracted driving, teen driving, workplace safety, prescription drug overdoses and Safe Communities.