In May 2018, Little Caesars Arena earned the Sports Facility of the Year Award by Sports Business, based on excellence, growth, creativity, innovation, sound planning, implementation and outcomes. The arena's "deconstructed" design features numerous buildings composing the whole sports and entertainment destination, and anchoring a 50-block area branded as The District Detroit.

Accepting the recent award, Christopher Ilitch, president and CEO of Ilitch Holdings, Inc., said, "Our vision for what Little Caesars Arena could offer to fans, players, artists and community members drove us to create something very special and highly innovative. Every aspect of Little Caesars Arena was designed to enhance the guest experience, and we appreciate that those efforts continue to be recognized." 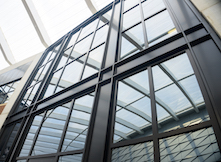 "One of the main design goals was to make the arena fit into the fabric of downtown and the surrounding neighborhood, rather than being this behemoth arena that dominates the area by its immense height and scale. The arena fits on what was four square city blocks," explained Senior Project Architect Paul Leskovac, senior associate of HOK's global Sports + Recreation + Entertainment practice. "One way we achieved it is that the arena floor is actually 30 feet below street level. If there was no signage, one might think it was a cool urban infill project – which it is!"

This approachable sizing is complemented by a 61,000-square-foot covered concourse and three connected, mid-rise buildings (A, B and C). Their upper floors are office spaces for Google, 313 Presents, Detroit Red Wings and Olympia Entertainment. The street levels offer restaurant and retail services, such as the Detroit Pistons and Red Wings' team store, Mike's Pizza Bar, Sports & Social Detroit, Kid Rock's Made in Detroit and District Market. Detached from the arena and concourse, the parking garage also has a covered walkway bridge to the arena.

Conveying a sense of both contemporary and permanent placement, various configurations of brick, glass, metal and finish colors comprise these buildings' façades. "Tubelite's entrances, storefront and curtainwall are used on all façades of the arena. This includes the four main entry entrance systems and curtainwall, as well as curtainwall punched openings in the façade of the arena and Buildings A, B and C," said Leskovac. "The colors helped make the façades appear like different buildings on a downtown street." 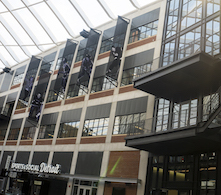 The durable finishes also reduced the need for maintenance costs and maximize long lifecycles. Under Linetec's stringent factory-controlled processes, the finishes meet the American Architectural Manufacturers Association's (AAMA) 2605 and AAMA 611 industry standards. As an environmentally responsible finisher, Linetec applies these high-performance painted coatings, and safely captures and destroys the VOCs present in liquid solvent-based paints before the finished products' arrival on the building site. Anodize finishes do not contain VOCs and process byproducts are recyclable.

Further contributing to sustainability, the aluminum curtainwall, storefront and entrance systems also are 100 percent recyclable. Tubelite's products also are tested per the AAMA standards for air, water, structural and condensation resistance. In addition, they are tested and modeled for thermal transmittance per the National Fenestration Rating Council (NFRC) procedures.

In addition to sustainability, Tubelite's curtainwall systems also support the project's security goals. At the first floor elevation, 1.25-inch, insulated, Solarban 60 low-e with impact-resistant glass was chosen for enhanced security. Other specifics are being kept confidential.

In Nov. 2017, Little Caesars Arena received SAFETY Act Certification, the highest level of protection awarded by the U.S. Department of Homeland Security. The facility became the first combined National Hockey League, National Basketball Association and entertainment venue, and the only arena in the country, to earn the certification. It also has earned the Sport Event Security Aware (SESA) designation from the National Center for Spector Sports Safety and Security (NCS4).

Demonstrating its dependability and partnership with the collaborative construction team, Tubelite's processes ensure orders are delivered undamaged, complete and on time. This also supported construction of Little Caesars Arena in its overall on-time and on-budget project completion.

The project broke ground in Sept. 2014. Construction began in April 2015 as managed by the project's construction manager Barton Malow-Hunt-White, a joint venture between Barton Malow Company and Hunt Construction Group, in association with White Construction. A combination of traditional, design-assist and design-build delivery methods was used throughout the project schedule.

At the Sept. 2017 ribbon-cutting opening event, Christopher Ilitch praised the project and those who built it: "Today, I am so proud to say that our vision of a Michigan-made, Detroit-built Little Caesars Arena came to life even more powerfully than we had imagined, bringing opportunity into local businesses, local workers, people in need of new careers. ...We put our heart and soul into something truly spectacular for the people of this city, state and region."

"We owe a great debt of gratitude to the trade construction workers who made this happen, but it also pointed out we need to grow those fields," Snyder said. "We need to invest in the professional trades. We need to show them greater respect and understanding."

Adding his compliments for Tubelite's contribution, Leskovac remarked, "They were both a part of an amazing construction team that participated in building a one-of-a-kind arena that Detroit, Michigan and the entire region can be proud of for a very long time."

The construction of Little Caesars Arena positioned Detroit as the only city in America that houses all four of its professional sports teams in an urban core -- all within walking distance. Home to the Detroit Tigers, Detroit Red Wings, Detroit Pistons and Detroit Lions, The District Detroit represents the greatest density of professional sports teams in one downtown core in the country.

As of May 2018, Little Caesars Arena has been the home for more than 150 ticketed events for 2.3 million fans, including a combined 82 Red Wings and Pistons regular season home games, more than 50 concerts and shows, and 15 additional sporting events. The multi-purpose facility also has hosted more than 100 private events, and is on track to be one of the busiest arenas in the world during its first full year of operation.

Little Caesars Arena is one of more than a dozen developments launched by the Ilitch organization in The District Detroit since 2015. More than $1.4 billion in development is underway or planned, setting the stage for additional retail, office and residential projects. Development in The District Detroit already has created more than 20,000 construction and construction-related jobs and more than 3,000 permanent jobs after the opening of Little Caesars Arena, two-thirds of which were filled by Detroiters. These future projects are expected to continue growing the city's economy and create new opportunities for Detroit and for Michigan.

For more than 70 years, glazing contractors have counted on Tubelite's dependable service, fabrication and distribution of architectural aluminum products. Part of Apogee Enterprises, Inc., the company is an industry leader in eco-efficient storefront, curtainwall and entrance systems, and recognized for its fast, reliable and consistent delivery.