Posted on May 4th, 2015 by heatherwestpr 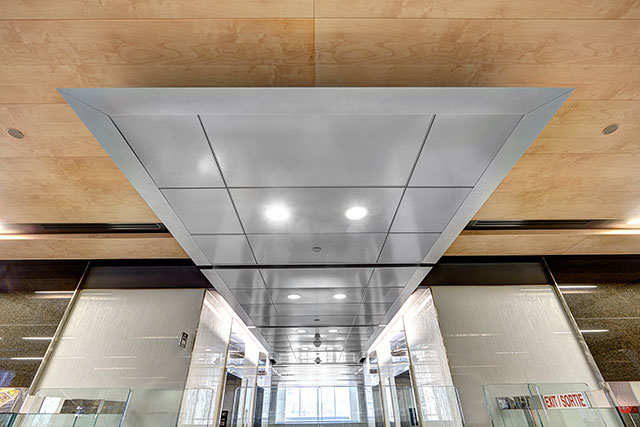 A new 650,000-square-foot, 17-story federal office complex makes its home at 90 Elgin Street on Crown-owned property amongst Ottawa’s national monuments and institutions. The $250 million landmark building features ROCKFON’s ceiling systems throughout its lobby and offices. In addition to helping create an attractive workplace, these ceiling systems also support requirements for comfort, including acoustics; safety, including seismic conditions; and sustainability, including LEED® Gold criteria.

As the 90 Elgin Street’s development manager, GWL Realty Advisors Inc. ensured the building would be worthy of its prominent placement and national significance for the Government of Canada as the landowner and The Great-West Life Assurance Company as the building owner. Designed by the joint venture of DIALOG and David S McRobie Architects (DSMA), the building’s stature and style are consistent with other significant federal buildings surrounding Confederation Square.

Bringing this vision to reality, Ron Engineering and Construction (Eastern) Ltd. served as the design-builder and began construction in 2011. “Maybe about every 25 years a building this big comes to Ottawa. This one takes the cake,” says Mike Tang, superintendent at Ron Engineering. “It’s a very large building with a very large lobby. It takes a team effort.” 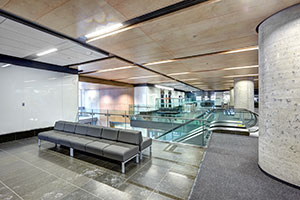 Morin Bros. Building Supplies’ vice president, Gerald Morin, CTR, agrees, “Like us, Ron Engineering had a long-time relationship working with DSMA and they had great faith in the design-build team members they gathered. It was a good group of people around the table.”

DSMA’s vice president, James Salem, acknowledges the project was both collaborative and challenging. He describes the team effort as “design-build that’s value-engineered as you go. We were balancing cost effectiveness with very high quality standard. The request for proposal called for high-quality materials in the lobby such as granite, glass, metals and a wood ceiling. Not only were these high-end finishes expensive, they also are very hard surfaces.”

State of the Art Acoustik Inc. modeled the lobby’s acoustical options and possible solutions. Salem continues, “The ground floor’s public space is an irregular volume with a three-story atrium at the main entrance, and a large concourse intersected by a cross axis with a two-story lobby at one end and a split-level lobby at the other. The models showed that noise was going to be an issue. There was concern that excessive reverberation caused by the use of hard surfaces would make it very difficult to hear any announcements over the public address. The ceiling was the only opportunity to improve the acoustic performance.”

Other challenges the ceiling team needed to address included designing for sustainability and for potential earthquakes. Salem elaborates, “Ottawa is in a very high seismic zone. We’re not quite as high as California, but it’s a very important part of our buildings’ design and construction. To some extent, every part of this building was designed with consideration to seismic standards and sustainability in mind. They were key factors in the ceiling system, too.”

Morin agrees, “The lobby area is one of the most important interior areas in making a great impression. Once we understood the design criteria and parameters, after discussion with the whole team, we could begin to explore alternatives that fit into the budget and met design expectations.”

Familiar with ROCKFON’s capabilities, specialty metal ceiling panels and Chicago Metallic™ suspension systems, Morin sought out their technical services team. With confidence, Morin explains, “I was sure they could produce it. They have the wood-look painted finish on metal panels, which saves a lot of money compared to real wood. They have the know-how and, for the most complex areas, I was certain they could adjust their regular systems to fit the job’s requirements.”

Working closely with ROCKFON and installing contractor Advance Drywall Ltd., Morin Bros. coordinated a full-scale mock-up showing ceiling solutions for the lobby that combined the desired aesthetic of wood and the performance benefits of metal. According to Salem, “The mock-up was really important in helping work through the details.”

Morin adds, “It made a big difference to be able to see and feel the mock-up. Of course, once they approved it, we had to build the thing.” 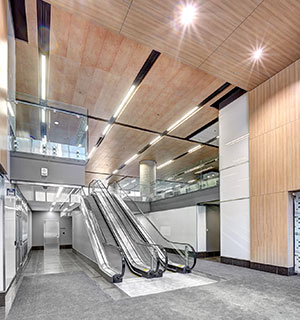 Satin Silver anodize also was the finish of choice on the ceiling pods positioned at the elevator bays. These pods are composed of Rockfon Chicago Metallic suspension systems, InfinityZ Razor Edge perimeter trim and Planostile lay-in metal panels. An acoustical backer and perforation on the panels offer high sound absorption, achieving a Noise Reduction Coefficient NRC of 0.90. Elsewhere in the lobby, 0.70 NRC was acceptable.

Final details were presented to confirm how ROCKFON’s various ceiling systems integrated with the lighting, air diffusers, sprinklers, security systems and columns. Not only did the ceiling system need to accommodate these elements, it also needed to provide easy access to the plenum for potential repairs and updates to wires, pipes, ducts and other components. ROCKFON’s hook-on panels allow maintenance staff downward accessibility to the plenum and mechanicals, without the need of special tools.

“Ease of access for the maintenance team meant a lot to the owner,” emphasizes Morin. “They wanted to be able to open a ceiling panel in the middle of the lobby and fix or replace what needed attention. They did not want to start at the wall, having to take out all of the panels in sequence, to finally reach the middle of lobby; fix what needed to be fixed; and then have to put all of the panels back in place.”

Elaborating on the benefit of choosing ROCKFON, Morin also noted, “They could meet the acoustic specifications. They could handle the multiple ceiling levels, complicated intersections and multiple systems. And they could cut everything in their factory. The lighting fixtures already had been ordered, so extra care was needed to make sure the ceiling panels were properly sized for a smooth installation.”

Accommodating the lights and air diffusers, the custom-sized Planostile planks were finished in both black and in Satin Silver. The Satin Silver was matched with Rockfon® Infinity™ perimeter trim for a clean, smooth edge. Beyond the numerous sizes of factory-cut panels, the large columns in the main lobby also proved challenging.

Pete Rudd, ROCKFON’s project manager, remembers, “We put a lot of time in developing the details so that it could just go up out of the box. It's considered ‘modified standard,’ but it’s actually a very customized solution. We created a new attachment for the hook-on system, along with special wall channels, column rings and connectors.” 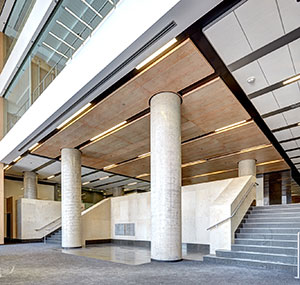 Ron Engineering’s Tang also noted that finalizing the shop drawings and details for these complicated systems “took a lot of back-and-forth. But when everything started to come in, it was bang-bang and you’re done.”

In addition to the lobby, Advance Drywall Ltd. installed Chicago Metallic suspension systems in the majority of the offices. Promoting team building and enhancing workplace well-being, the offices’ interior design subscribes to the new “Government of Canada’s Workplace 2.0 Fit-up Standards.” This initiative champions the design of modern workplace to attract, retain and encourage public servants to work smarter, greener and healthier.

Aiding in these sustainable goals, ROCKFON’s metal ceiling suspension systems and panels contain no organic compounds that would support mold or microbial growth. Its aluminum ceiling panels contain 100 percent post-consumer recycled content and, after their useful life, can be recycled locally.

The project earned LEED Gold certification for Core and Shell, met all other required performance criteria, and was substantially completed on schedule. “At the end of the day, everybody loves the ceiling,” Tang says proudly.

“It was quite an exercise in coordination and integration. In the end, it turned out very well. It’s a good balance of quality finishes for a good value,” concludes Salem.

Completed in Oct. 2014, the building was named as the James Michael Flaherty Building in honor of the late finance minister and one of the longest-serving Ministers of Finance in Canada’s history. Up to 2,600 federal employees are expected in the building by May 2015.